Skip to content
Home » Aesthetics » Duvelleroy Paris: The Awakening of a Sleeping Beauty

Archaeological ruins and ancient texts show that the hand fan was used in ancient Greece at least since the 4th century BC and was known under the name rhipis.

Hand fans were absent in Europe during the High Middle Ages until they were reintroduced in the 13th and 14th centuries. Fans from the Middle East were brought by Crusaders and refugees from the Byzantine Empire.

Portuguese traders brought them from China and Japan in the 16th century, and fans became generally popular. In the 17th century the folding fan, and its related semiotic culture, were introduced from Japan. The fan is especially popular in Spain, where flamenco dancers used the fan and extended its use to the nobility. 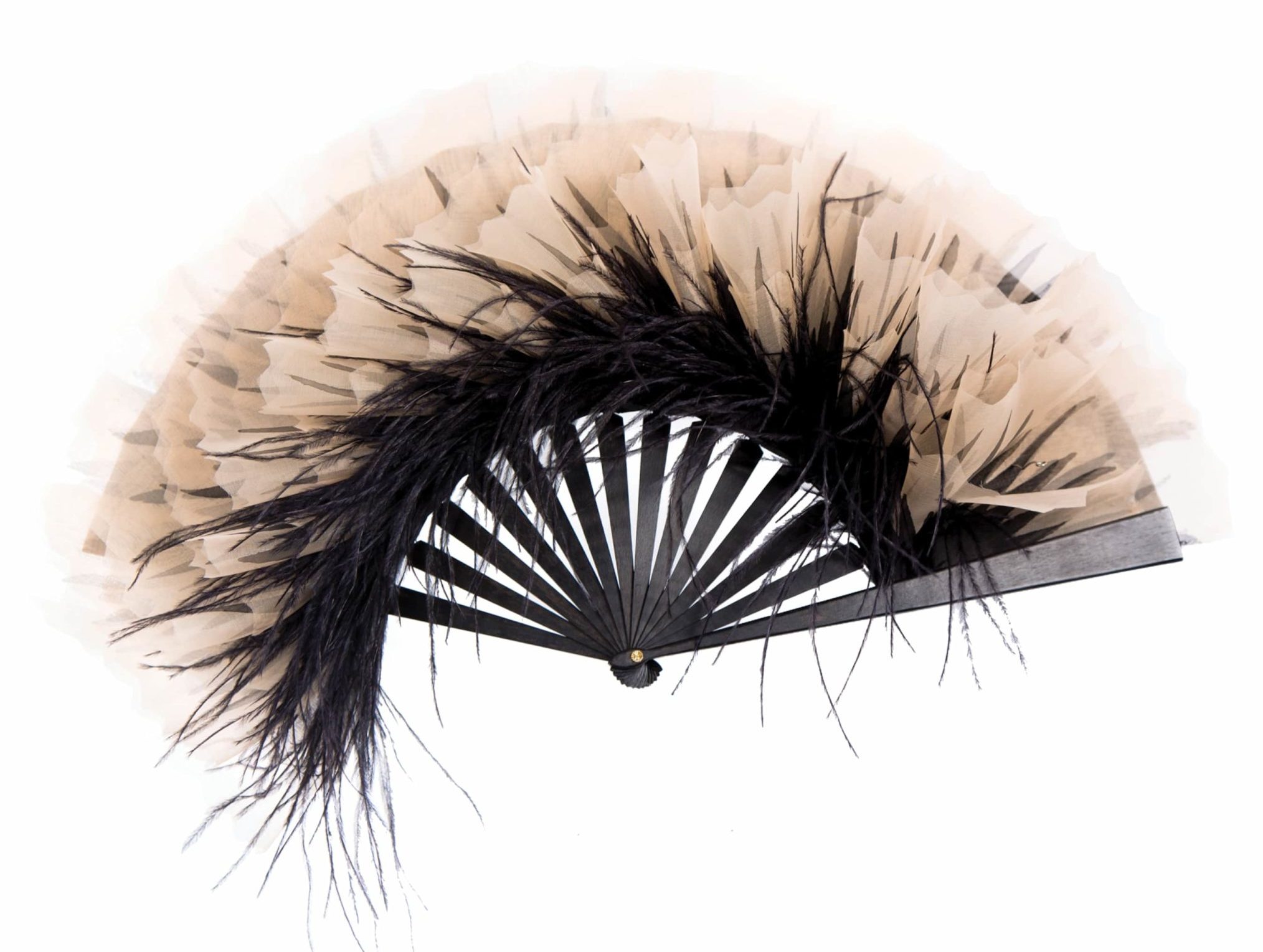 The Original Duvelleroy Fan House was founded in Paris in 1827

Duvelleroy began with Jean-Pierre Duvelleroy’s dream: to bring fans back into women’s hands. The Duchess de Berry organised a sumptuous ball which made this happen: one dance and fans were back and that was the start for the house of Duvelleroy.

From then on, the delicacy in the making of the fans – representative of the French Couture savoir-faire – granted the original house with many gold medals.

Fathers and sons received the Légion d’Honneur, the Greatest Order of Merit for in France.

Over this decade, Jean-Pierre Duvelleroy was appointed supplier to various courts, starting with Queen Victoria. The original house also created Eugénie de Montijo’s fan for her wedding with Napoleon III and supplied the city of Paris with presents for the spouses of statesmen during their official visits in France, for example the Empress of Austria, the Queen of Sweden, the Queen of Denmark or the Queen of Bulgaria.

Parisian beauties, trendsetters of their time, such as the Comtesse de Greffulhe, also fancied holding the maison’s hand-fans in their hands.

The Belle Epoque and Art Nouveau opened a flourishing creative era for the Georges Duvelleroy, the heir of Jean-Pierre.

During that period two house emblems were born: the “Balloon” Fan, named after the aerial shape of its leaf and the Daisy as a signature, stamped on each rivet.

By the end of the XIXth century, the Maison starts collaborating with renowned illustrators such as Paul Iribe, Gendrot, Gicar, who create commercial hand-fans for great names of the luxury world such as the Ritz.

The Language of the Fan

The London house gathered and published a leaflet detailing and explaining the coded gestures to express discreetly things like “I love you” drawing the fan across the cheek or “Follow me” carrying the fan in the right hand in front of her face… thus illustrating the playful and mischievous spirit of the Maison!

As a complement to hand-fans, Duvelleroy provided clients with all the accessories required by an elegant life (evening purses, binoculars for the Opera…) featuring the best and most innovative crafts of the time.

From the patented “Tom Pouce” binoculars to the tassels used to hang fans from belts, or the registered design of the trophy fans, the maison innovates following the guidance of Georges Duvelleroy.

World War I marks the end of a certain world and its way of life: fabric hand-fans decline in favour of commercial ones. The Ostrich fans remain in fashion thanks to the taste of the “Garconnes” of the roaring 20s.

Duvelleroy manufactures the white ostrich feather fan worn by the Queen of Egypt Farida Zulfikarat her wedding with King Faroukin 1938.

Georges Duvelleroy passes on his savoir-faire and knowledge to Madeleine Boisset, painter and fan maker, while his daughter takes over the direction of the company.

The evening bags become the major part of the Maison’s creations and enable to maintain the activity. 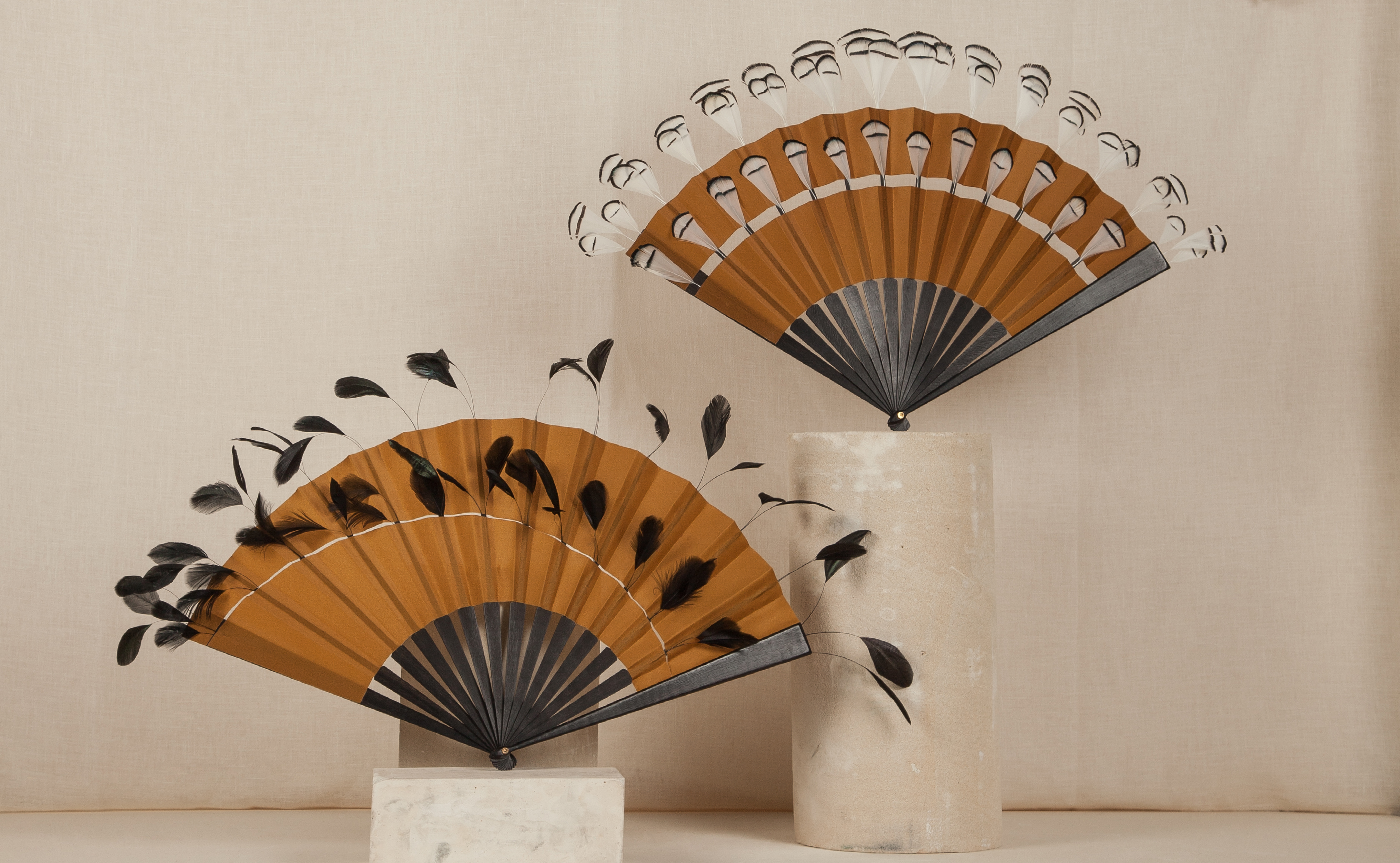 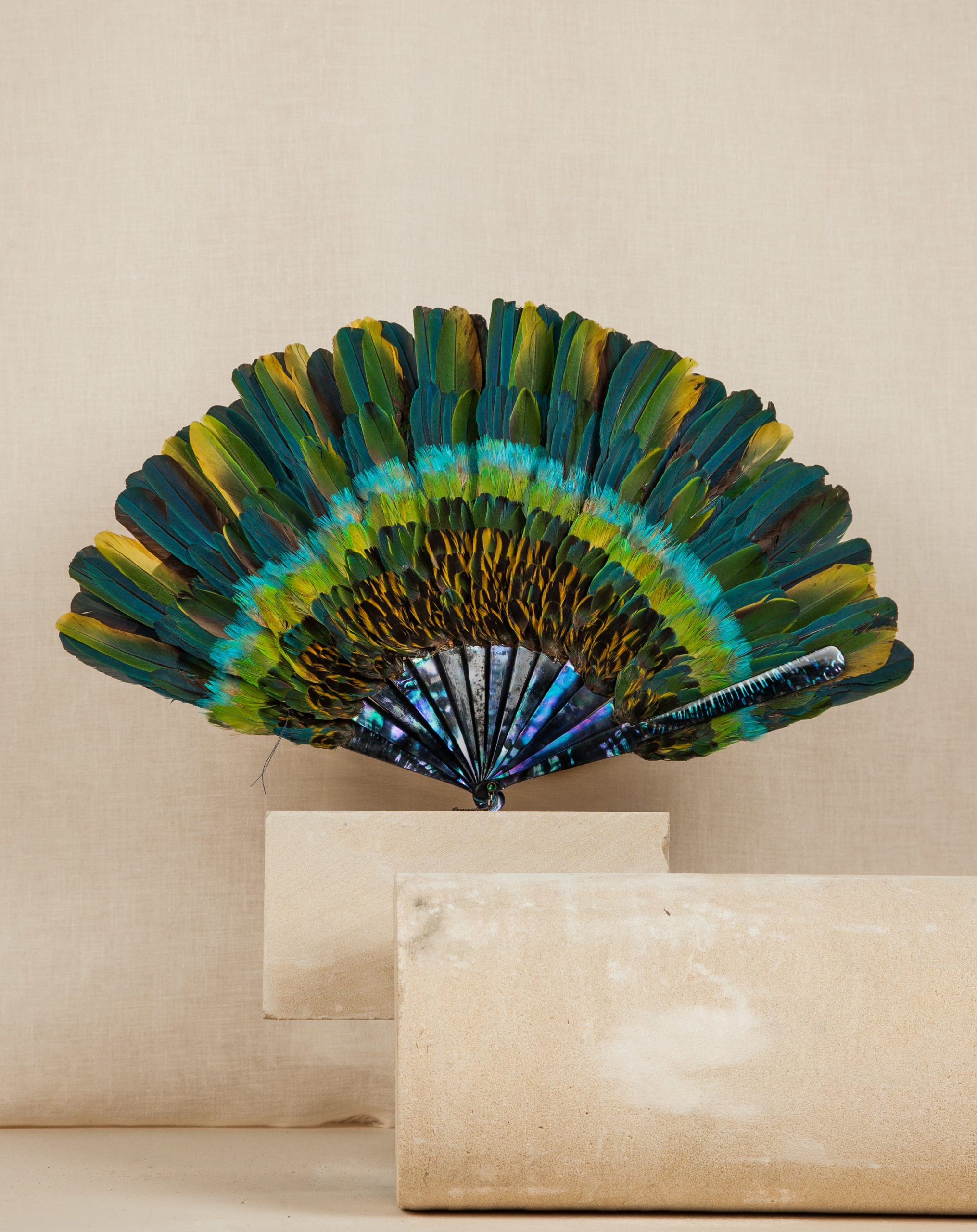 In 1940, Jules-Charles Maignan acquires the Maison. Madeleine Boisset, a longtime apprentice of Georges Duvelleroy, ensures the continuity of the know-how. With her, the young Michel Maignan discovers the world of fan making. Duvelleroy is one of the few fan houses that made it after WWII.

During the following decades, selling small leather goods and pouches, as well antique fans and restoring them becomes the key activity of the house.

In 1981, Jules-Charles Maignan passes on to his grand-son, Michel Maignan part of the archives of the original Duvelleroy house: fans, tools, material and furniture gathered since 1827. “I give it to you so that you can make something out of it”, his grand-father said.

During the following decades, this patrimony was presented in many retrospective exhibits around fan making.

The placing of pheasant feathers on a sheet of coral silk

2010, The Awakening of  A Sleeping Beauty: A Creative Renewal

The revived Maison conveys the traditional French fan-making savoir-faire in Couture hand-fans, whilst embracing the taste of modern times through ready-to-wear fans.

Other objects, such as headdresses and mural wall lamps, enrich the house’s universe and come as a reminder that the original Maison had a broad field of expression.

The Duvelleroy fashion fans are manufactured in small series by in a family-run partner atelier based near Valencia, the Spanish birthplace of hand fans. Each cotton leaf is stiffened, pleated and mounted by hand on wood frames. 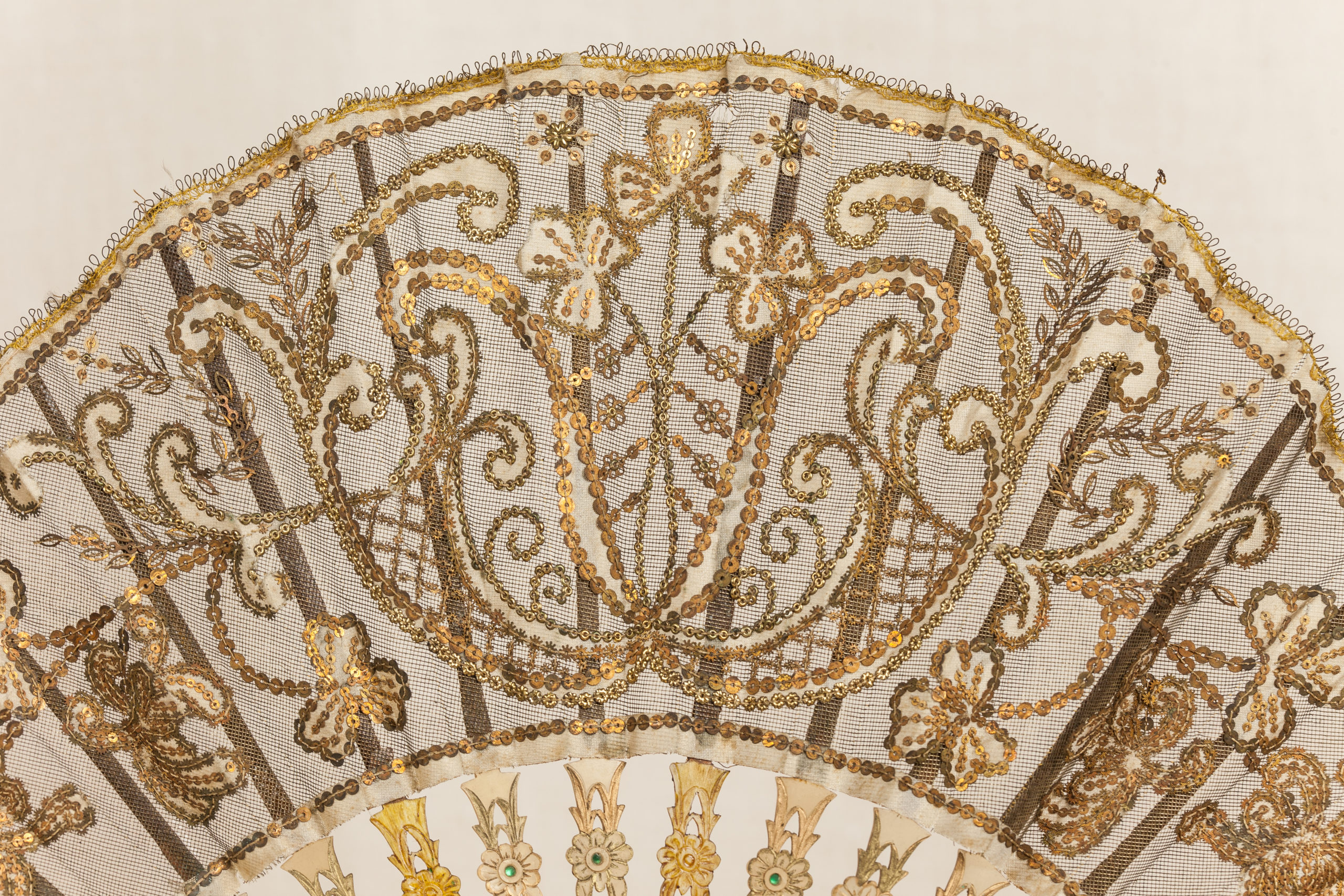 Through its Couture creations, Duvelleroy revives some signature crafts that were emblematic of the original house.

Thanks to the unique « cold pleating » technique, the original Duvelleroy house started presenting extremely refined fans embroidered with sequins in motifs known as the «Point de Hongrie » or in the «Napoleon III » style. Fans entirely covered in sequins are referred to as « armure fans”.

The original Duvelleroy was renowned for its unique feather craft ability, developing audacious shapes with feathers when the natural shape of the feather provides the general shape of the hand-fan. (Nowadays, all feathers are moult feathers collected in farms).

A beautiful book recently published, that depicts the saga of the Parisian fan house Duvelleroy, born in 1827 with of a dream: to bring fans back into women’s hands.

The AuthorMarie-Clémence Barbé-Conti, studied history at La Sorbonne. She is a journalist who specializes in analyzing the luxury and creative sectors, and the history of luxury brands and companies.

This site uses Akismet to reduce spam. Learn how your comment data is processed.

In case you missed these…